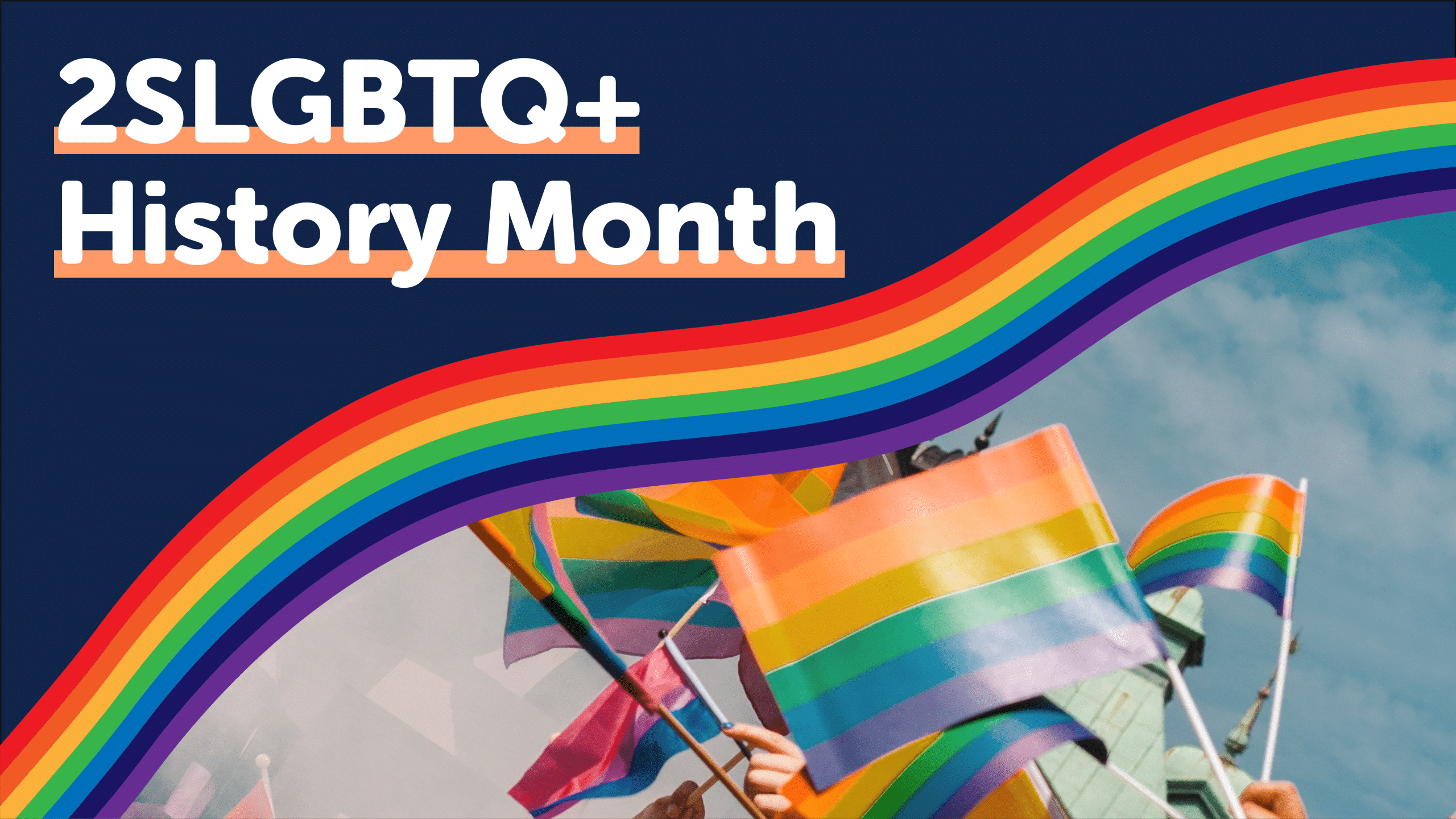 When asked about the history of pride, queer rights, or 2SLGBTQ+ history, what often that comes to people’s minds (rightfully so) are the Stonewall Riots which occurred in New York City. But did you know Canada has its own history of 2SLGBTQ+ victorious resistances and celebrations? There are many turning points in the struggle for, and eventual celebration of, 2SLGBTQ+ rights just like…

May 14, 1969: Canada decriminalized homosexual acts between consenting adults with the passage of the Criminal Law Amendment Act first introduced in December 1968. It received royal assent on June 27. One day before the Stonewall Riots took place!

How can I Celebrate 2SLGBTQ+ History Month?

1. Learn about the history of 2SLGBTQ+

2SLGBTQ+ history month aims to highlight the achievements of those who have spearheaded and led the cause for two-spirit, lesbian, gay, bisexual, transgender, and queer people. Read up on them and learn about their ideas and ideologies. Check out the next section as a starting point!

The rainbow flag is most popularly associated with the 2SLGBTQ+ community, but did you know that each colour of the rainbow’s flag has a different meaning?

Wear the colours of another 2SLGBTQ+ flag, such as the Transgender flag, that is important to you or get creative in other ways to express your support.

2SLGBTQ+ events don’t just happen in June for Pride! There are countless more seminars, mini-parades, and celebrations that take place during 2SLGBTQ+ History Month and the rest of the year. Check out the following:

And follow Glow on Instagram to be in the know on events as soon as they are announced: @uwglow.

Where can I learn about Canadian 2SLGBTQ+ History?

Looking for a starting point? Queer Events is a fantastic resource and starting place to learn about Canadian 2SLGBTQ+ History. In 2019, they wrote an article titled: Four Key Protests in Canadian LGBT2Q+ History.

Check out a timeline of queer Canadian History at https://www.queerevents.ca/canada/pride/history

The Grand River Rainbow Historical Project began in March 2011. It contains an interesting and useful record of the histories of our intertwined rainbow communities in the Grand River area of Southwestern Ontario. For this project they “are interpreting rainbows to include, but not be restricted to, the following communities: lesbian, gay, bisexual, transgender, transsexual, two-spirit, intersex, queer, questioning, fluid, and asexual.”

Their website is self proclaimed “still very young,”: they note on their site they have a big backlog of information yet to be processed and are also looking for more source materials. So, the information here will grow considerably over the coming year!

The teachings we hold around sexual orientation, gender identity, and expression are largely westernized. Diverse expressions of gender and sexuality have long predated the colonization of Turtle Island.

If you’re looking to learn more about Indigiqueer history, check out…

The goal of this terminology guide is to increase awareness of the Two-Spirit Peoples and communities, and to provide safer language for researchers to use. https://www.cbrc.net/two_spirit_terminology_guide

This group is co-facilitated by Red Sky Woman (Hollee George) and a guest elder or knowledge keeper. It meets monthly on the first Tuesday of the month from 7-9 pm. Each month they have a discussion topic for the first hour of the meeting. The second half of the meeting is open for allies to ask questions and learn about the experiences of Indigenous people in our community. Find more info on their events calendar!

Since Glow has gathered around the premise of supporting the gender and sexually diverse students on our campus, they and WUSA also acknowledge that we are fighting for rights to identities that have a history on these lands.

Two-spirit people have existed on this land for thousands of years as revered members of their communities but have been subjected to historical erasure by settlers.
The Glow Centre’s community was not the first gathering of queer and trans people on this land, and we do not claim to be.

Where Can I Find my 2SLGBTQ+ Community and Resources…

…at the University of Waterloo?

…in the Waterloo Region?

Events and resources in Waterloo Region

WRRC is a volunteer-based community association that acts as a central hub for the local Rainbow community.

tri-Pride is a community organization that celebrates Pride and diversity in the Kitchener-Waterloo and Cambridge region.

QTBIPOC Toronto is a group for 2SLGBTQ+ women, trans and non-binary folx who are Black, Indigenous, People of Colour. They host virtual drinks, paint, board game or video game nights, queer dance parties, and more.

OK2BME is a set of support services for 2SLGBTQ+ youth in Waterloo Region.

Out on the Shelf