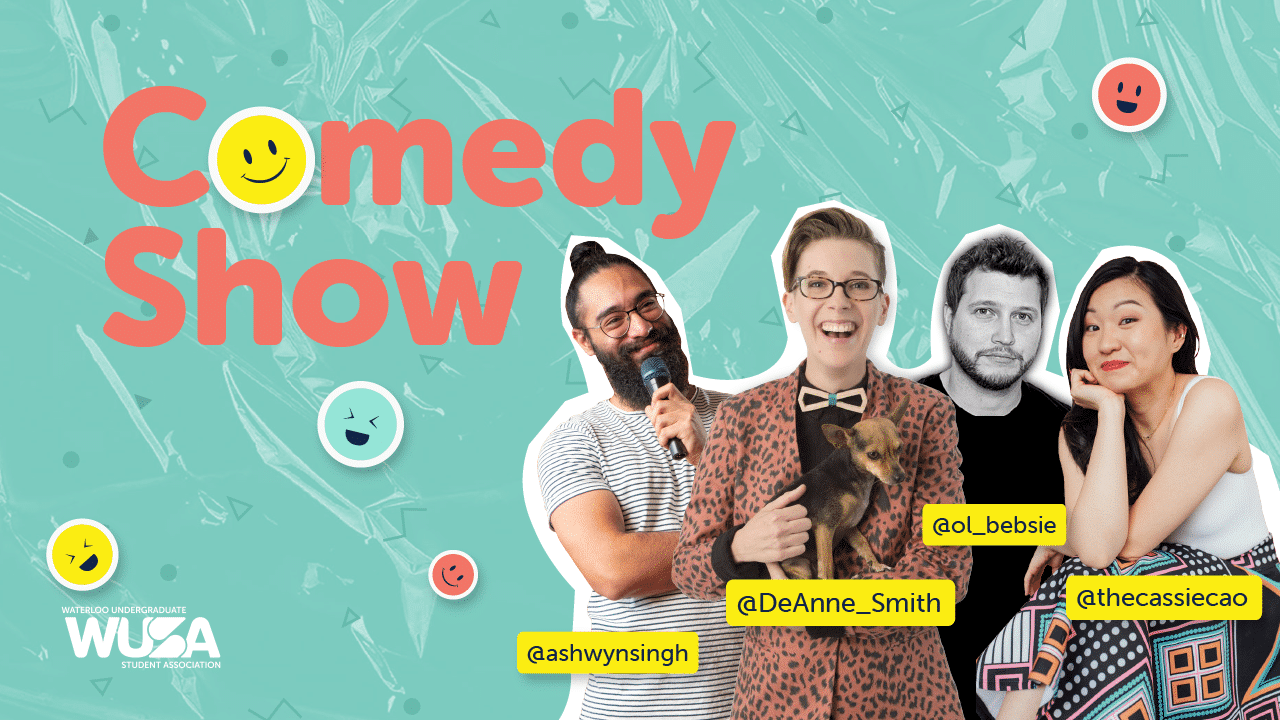 Join us for a memorable evening of laughs at UW’s electrifying comedy show on Wednesday, February 8 in the Theatre of the Arts, ML at 7:30 pm.

Tickets are free. Reserve your tickets now before it’s too late!

DeAnne Smith, a Canadian Comedy Award winner, has performed at Just for Laughs, JFL42, the Winnipeg Comedy Festival, Melbourne International Comedy Festival, the New Zealand International Comedy Festival, Edinburgh Fringe Festival, and the Iceland Comedy Festival to name a few. They’ve also been on TV all over the world, including on Last Comic Standing and The Late Late Show in the U.S., as well as in Canada, Australia and the UK. Their video “Straight Men, Step Your Game Up” has over 46 million views. Melbourne’s The Music calls their latest show, Post Joke Era, “a virtuoso display of smart, slick, silly brilliance — a metaphorical (and literal) mic-drop of a show,” giving it five stars, while the UK’s Chortle calls Smith “always relevant, but never reverent. The UK Telegraph says they’re “Smart. Very funny. Effortless charm lets her (sic) get away with murder.” They’ve never actually murdered anyone. You can watch their half hour special, Gentleman Elf, on Netflix RIGHT NOW!

After appearances at the Just For Laughs Festival and a breakout viral video from Winnipeg Comedy Festival in 2018, Rob Bebenek has asserted himself as one of the brightest new voices to come out of Canada. Quick wit and a keen eye for observation highlight a comedy skill set that is becoming a force on stages across North America and has audiences wanting more.

As a finalist in Sirius XM’s Top Comic, Bebenek asserted himself as a major player in comedy and has since imposed his brand on theatres, clubs and colleges and rightly so – the man is flat out funny.

From Kitchener Ontario, Bebenek AKA Ol’ Bebsie, has been drawing acclaim across Canada earning himself appearances on MTV and opening concert series for Bob Saget, Burt Kreischer, Charlie Murphy, Steve-O, Gerry Dee and others.

Ashwyn Singh is an Indian immigrant turned Canadian permanent resident, and he’s been getting stuff off his chest ever since the PR card came in the mail. His brand of philosophically humorous commentary on family, society, and culture is entertaining for everyone, but his devilishly witty crowd work is what keeps people at the edge of their seats.

Cassie Cao is a Canadian Comedy Award winning comedian, writer, and actor based in Toronto. Cassie was a “New Face of Comedy” at the Montreal Just for Laughs Festival. Her standup can be seen in the first season of CBC Gem’s The New Wave of Standup, Crave’s The Jon Dore show, and on both seasons of Roast Battle Canada. Cassie is a highly sought after television writer, having written for Netflix’s Kim’s Convenience, HBO Max’s Detention Adventure, CBC’s True Dating Stories and the live Giller Prize Award Show. She has also written for the stage for the Second City and The Blue Man Group. As an actor, Cassie can be seen in numerous television comedies such as Amazon’s Kids in the Hall reboot, CBC’s sketch show Tallboyz, and PBS Kids’ Odd Squad.

Cassie was formerly an economist and has years of experience telling jokes about the interest rate to prominent Canadian policy makers.

This is an all ages event!

WUSA welcomes you to contact any of our staff with your questions or inquiries. View the Staff Directory Listing for departmental and individual contact details.

Leave us a note on experience or satisfaction levels on a product, service, or position WUSA may be taking through our Feedback form.